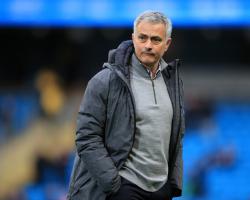 The draw for the quarter-finals was due to be live-streamed on Twitter at 4pm on Thursday but was delayed by what the competition sponsors called a "minor technical glitch at Twitter HQ".

It was conducted by former England rugby union international Matt Dawson and ex-England cricketer Tufnell but, as with the previous draws, it did not go to plan

A pre-recorded draw was eventually posted on the Carabao Cup's feed at 5.50pm and Twitter users were predictably quick to ridicule the latest mishap, but Tufnell stressed he was not to blame for anything that had gone wrong

Tufnell released a statement on his Twitter account on Friday which read: "I understand football fans' frustrations yesterday due to the delay in the Carabao Cup quarter-final draw due to technical issues that were beyond both Matt's and my control

"However, due to the outpouring on Twitter where some suggested the delay was likely due to my lateness, I feel I need to clarify this was certainly not the case.

"In fact, despite sledging by not only members of the general public but also people within the media suggesting it's my "form" to be late, I actually pride myself on my time-keeping and arrived at the venue in good time.

"Further, I totally refute ludicrous allegations that I would be involved in anything not above board

Matt and I pulled out the balls in front of various representatives who from my understanding were official adjudicators!

"Worse, for people to accuse me of anything untoward disgusts and upsets me

I'm a football fan and former sportsman that was excited and honoured to be asked to be a part of this and took the role seriously.

"If you have any further issues with this please take it up with the organisers of this event and not me!"

Draws for earlier rounds had seen Charlton pulled out of the hat twice, confusion over which teams were at home and away, and criticism over the decision to hold a draw in Beijing at 4.15am UK time.