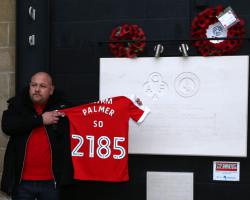 Charlton's match against MK Dons was dedicated to the memory of PC Palmer, who died in the Westminster terror attack last month.

PC Palmer's brother John Curtis led the teams onto the pitch at The Valley, followed by 22 of the fallen policeman's colleagues.

PC Palmer's seat remained empty, having been changed from red to white for the rest of the season and bearing his warrant number, 'P204752'

Charlton's players donated their appearance fees for the Sky Bet League One match to PC Palmer's family, while the club gave 50 per cent of the ticket sales

Both teams wore black armbands while Charlton's players wore special shirts which included his warrant number on the sleeves.

Outside the ground flowers from supporters and other clubs were laid around a statue of former Charlton goalkeeper Sam Bartram, where in due course a permanent memorial stone to PC Palmer will be placed alongside existing memorials.