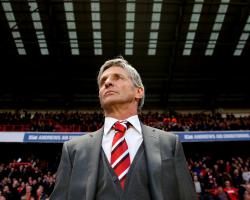 The 58-year-old's arrival follows the sacking of his predecessor Karel Fraeye, who worked at the club on an interim basis, and makes him their third appointment of what has been a disappointing season.

Charlton remain 23rd in the Championship and appear likely to be relegated unless Riga can inspire a significant improvement in their disappointing form.

Fraeye was sacked after Tuesday's 5-0 defeat at Huddersfield, their sixth loss from their past 10 fixtures, but Riga also inspired Charlton to survival in his previous 16-game spell there when succeeding Chris Powell in March 2014.

Charlton were then in a stronger position than they are this season - much-criticised owner Roland Duchatelet had only just taken over the club, whose supporters did not yet want him to leave and attended games in greater numbers - yet after Riga oversaw seven wins and three draws it surprised he was not permanently appointed.

Bob Peeters was in 2014 announced as his successor, and Guy Luzon and Fraeye have since also been in charge, meaning Riga's return to Charlton makes him the sixth head coach of Duchatelet's two-year reign.

"This has been a disappointing season for everyone connected with Charlton and the board take responsibility for that," Belgian Duchatelet told the club's official website.

"Some things, like an unprecedented number of injuries, we could not have foreseen

But we have also made errors in recruitment, mistakes we have immediately tried to address in January.

He was very popular with supporters and I believe that he will get us back on track.

"There are 20 matches of the season still to play and it's vital that we battle for every point."

After leaving Charlton, Riga had an unsuccesful spell at Blackpool before seven months at Ligue 2 club Metz from June to December 2015.