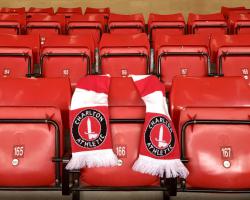 Addicks supporter and season-ticket holder PC Palmer, who was killed in the Westminster attack last month, will be remembered at the home match against MK Dons on Tuesday night

In a touching tribute, a red and white scarf has remained draped over PC Palmer's seat since the attack

On Tuesday a minute's silence will be held before the game

Charlton will donate 50 per cent of all ticket sales and the players will give their match fees to PC Palmer's family.

The squad will also wear black armbands and special shirts which will include his warrant number, 'P204752'.

"We'll be proud to wear Keith's warrant number on our shirts, but obviously we'd prefer it if he was there watching us," Robinson said at a press conference

"It will be a very emotional evening

It's never going to be enough, whatever we do, because a life has been lost and you can't bring back a life

We are a united group

This event has certainly shaken us and rocked the nation.

"When someone tragically loses their life protecting us, and the public, we have to care and support the people who are left behind.

"What we are doing is a small price to pay

Money and what you can do with it is not relevant

The greatest gift we are all given is life.

"The players and the club have made a great gesture

But it's only a gesture

Because no amount of money is ever going to bring back a life.

"It's about us doing the best we possibly can and to show we care."