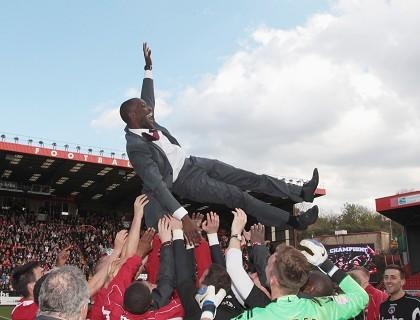 Jermaine Beckford continued his love affair with the FA Cup to fire Huddersfield into the fourth round with a 1-0 victory over a much-changed Charlton.

The Terriers were without a win in their last 10 outings and took the opportunity to end that slump with a win over an Addicks side which contained six changes from their last outing.

Beckford broke the deadlock after 11 minutes as he managed to stay onside before keeping his composure to slot past back-up goalkeeper David Button.

That took the striker's FA Cup haul to 16 goals for four different clubs in his just 19 games and ensured he had scored at this stage for the fourth successive year - a run which included a famous winner for Leeds over Manchester United at Old Trafford almost three years ago to the day.

Beckford continued to have a telling impact after the break as he was hauled down by last-man Dorian Dervite, who was subsequently dismissed for the trip.

The visitors failed to get a second goal to put the game to bed, but they were never really troubled by Chris Powell's side.

On-loan forward Beckford was unavailable to play against parent club Leicester on New Year's Day when Huddersfield crashed to a 6-1 defeat but he was immediately recalled to the starting line-up.

And it took him just 11 minutes to make his mark in 2013 as he scored for the first time since the Terriers' last win against Barnsley in mid-November.

Adam Clayton picked out the striker inside the area and, with Button rooted to his line, Beckford had time to pick his spot and rifle home.

The hosts, currently two places above their npower Championship rivals in the table, offered little in the first period but almost fashioned a chance when Bradley Wright-Phillips' cutback was turned away at the last moment.

Instead the chances were coming at the other end as James Vaughan had a goal chalked off by the offside flag before Button denied the same player from point-blank range.

While Vaughan was causing some problems it was Beckford who continued to pose captain-for-the-day Matthew Taylor and Dervite the biggest dilemmas.

The latter received his marching orders 12 minutes after the break when he pulled down Beckford, who was clean through on goal.

Yet that only seemed to finally galvanise the hosts, who introduced Michael Morrison into their back four in a tactical reshuffle.

Salim Kerkar's curling free-kick was pushed out by Alex Smithies as the Town goalkeeper was finally forced into a save.

Huddersfield failed to make their man advantage really count with Yann Kermorgant unable to head on target in the closing stages as Simon Grayson's men held on to book their place in the fourth-round draw.