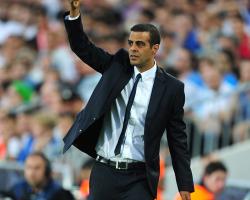 The 39-year-old replaces Bob Peeters, who was axed on Sunday following a poor run of results culminating in Saturday's 1-0 home defeat against Brighton.

Luzon, who has signed an initial deal until the end of next season, becomes the fourth boss Charlton have had since they were taken over by Belgian businessman Roland Duchatelet, who also owns Standard, just over a year ago.

He left the Belgian club in October following a poor start to the season, having previously managed a number of clubs in Israel and the country's under-21 side.

Charlton were unbeaten in their first 11 games this term, raising hopes of a promotion push at The Valley, but they have slipped to 14th after eight matches without a win.

Luzon told the club's official website, www.cafc.co.uk: "I am happy to have joined Charlton and will work as hard as I can to try and make the club successful.

"We have talented players in the squad and it is my job to try and bring the best out of them.

"It is important to have a positive spirit in the team and I want to ensure the entire group is fighting together for the good of the club.

"I look forward to taking training for the first time and getting my ideas across to the players."

Charlton owner Roland Duchatelet added: "I think the appointment of Guy Luzon will prove to be a very good one for the club.

"I regard him as an extremely talented coach who has already achieved a lot in his career so far.

"There were a lot of records broken during his first season at Standard LiÃÆÃÂ¨ge and they had the best defensive record in the league.

"He is a passionate coach who will give his all to Charlton and I hope supporters will get behind him."

Luzon will be officially unveiled at a press conference at The Valley on Wednesday and his first match in charge will be against Watford on Saturday.